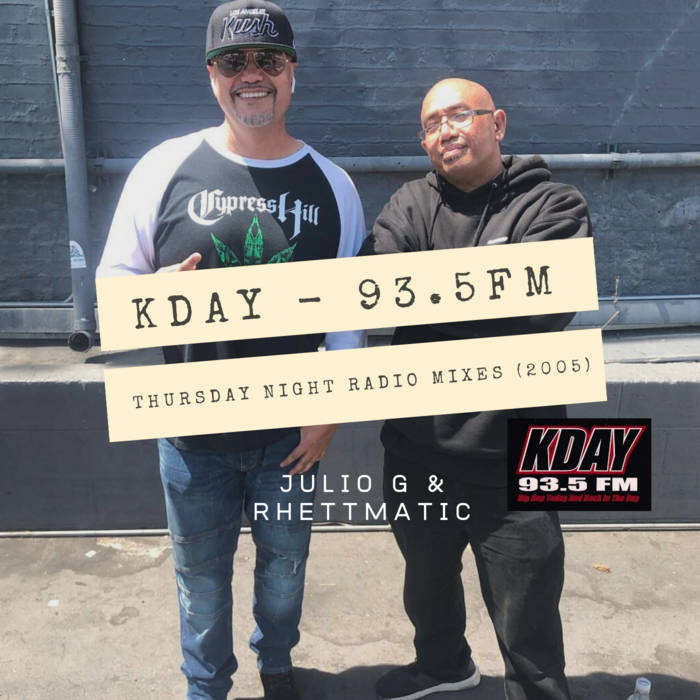 If anyone knew anything about my DJ career and The Beat Junkies, you would know that we used to dominate the airwaves on the Mixshows both on Power 106FM & 92.3 The Beat, the 2 Top Radio Stations in Los Angeles during the late 90's. Babu & myself would be the resident DJ's for the Soul Assassins Radio Show w/ B-Real & Eric Bobo of Cypress Hill (Melo-D was double duty with us & with Julio G) on Friday Nights. Melo-D was the main mixer for the 7'OClock Menu Mix with Julio G. While across town, up the dial, Mr. Choc & J.Rocc were at Power 106FM as part of the Fantastik 4our (w/ C-Minus & Truly Odd) with Friday Night Flavas.

Speaking of Julio G....what can I say about him. He's a big brother/mentor to us, a West Coast legend, and was the key component in giving most of the Junkies a career in Terrestrial Radio. His history & credentials are very deep: An OG 1580AM KDAY Mixmaster (Julio's a bad MF'er on the turntables & can still cut it up!), On-Air Personality on 92.3 The Beat, Co-Producer with OG 1580AM KDAY Mixmaster Dj Tony G for Mellow Man Ace's "Mentriosa" & Dj Pooh's "Woop Woop" feat Kam, Co-host of "Ruthless Radio Show" with the late great Eazy-E, the host of Westside Radio, the host/voice of "Los Santos Radio" on Grand Theft Auto V, & former Tour DJ for Cypress Hill. Like I said, what can I say about Julio....he helped put LA & the West Coast on the map!

Fast forward to the mid 2000's. Both Julio G & the Junkies already left the radio airwaves because the landscape for LA radio was changing & it was time for all of us to make bigger moves. Then around 2004, there was a buzz going around that a new radio station was about to appear on the scene with the call letters "KDAY", & people were excited. For the breakdown history of KDAY, of why it's such a big deal for Los Angeles Hip Hop History & how KDAY is very important to everyone that grew up in Los Angeles in the 80's & 90's, peep out our Beat Junkies podcast with Tony G: www.youtube.com/watch?v=yMJdoAnqQhY

In 2005, 93.5FM KDAY was born on the FM dial, people were excited. The only thing though, it's not the same as the KDAY we grew up in the 80's & it was mostly geared towards the nostalgia factor but with a updated vibes. It wasn't the same & for a lot of us that truly grew up with KDAY, you had to have someone that came from that era to really understand and at the same time, have their ears to the street. Thus, it was only right to have Julio G to be brought on board. It was a blessing that he brought Melo & myself with him to help KDAY be authentic. Basically, this was my last radio gig I ever before leaving the terrestrial radio airwaves for good. I was on 93.5FM - KDAY during the 2005 to early 2006. It wasn't the original 1580AM KDAY, but they were trying to mold the vibe to it. Julio was the On-Air personality; my fellow Beat Junkie, Melo-D was his main mixshow Dj from every Mon to Fri at 7pm. I would do Thursday nights at 7pm.

Here are a couple of my On-Air mixes that I would do live every Thursday nights, still using vinyl (the year before Serato came out), the Rane TTM-56, & the Pioneer 500EFX effect box. This is probably the last glimpse of dope mixing on LA radio before Radio fell off for good! Hope you enjoy these mixes & actually be surprised of the selection we got to play on the air, Beat Junkie Style! A BIG SHOUT OUT & THANK YOU ALWAYS to our big brother Julio G, all the 1580AM KDAY Mixmasters & all the OG LA DJs that influenced & paved the way for us.